Spiked or not, I think eggnog is wonderful. It’s something about that creamy spiciness that has me hooked. Obviously, homemade eggnog is better, but sometimes that’s just not an option. Even if I usually only have time to buy grocery store eggnog, it seems so luxurious when I’m sipping on a glass of eggnog on the rocks. 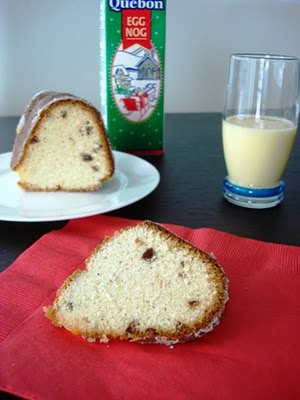 When it’s eggnog season, I drizzle it on everything. Eggnog appears on my menu on a daily basis. I find that the easiest way to incorporate eggnog into my daily routine, is by adding it to my usual daily beverages, like tea, coffee, hot chocolate (my current beverage of choice), and even an eggnog milkshake. Recently though, I’ve wanted to take my “nogging” a little further. So, I jumped from beverages to baking: this eggnog poundcake studded with rum-soaked raisins, and coated with a thick layer of rum-sugar glaze (recipe below) and an eggnog trifle with cranberries.

. I have wanted to buy this book for years, but never had the chance. I’m glad I finally did. This is her cover recipe, and I can safely say that I will be making it again and again. In fact, I already made it twice this week-end, for two different groups of friends. When I served up the first bundt, one person I served it to went back for thirds (that’s my girl!), while her husband (who never eats cake) happily gobbled a slice. When I served up the second bundt, a stampede of people lunged for the cake. So many, in fact, that I did not even get to sample a piece myself. Those that missed out on slices of this cake fought over the crumbs (no joke!). It’s a real heartwarming feeling when people are fighting over a bundt you made (not that I condone violence of any kind). Those that got to sample a few crumbs even emailed me to thank me for those crumbs. Wow! 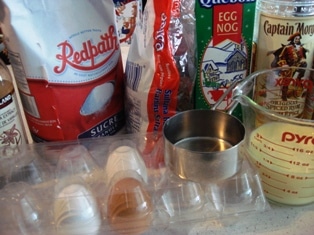 The eggnog bundt cake recipe comes from Flo Baker’s book Baking for All Occasions, available on Amazon. The glaze is a very crystalline glaze that I think would be great on gingerbread and lemon cakes. Flo Braker’s recipe called for a glaze containing lots of sugar, and a mix of water and rum. In my books, cakes can always use a little more booze, so I opted for lots of sugar and more rum (no water). Even with double the rum, the rum flavor was still far from overwhelming. I think it was just right. Several tasters commented that the rum flavor was just great, without making the cake seem too boozy. 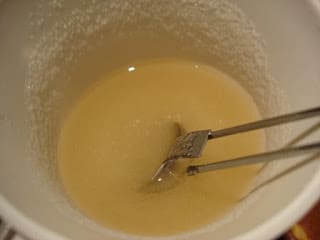 The crazy thing about this glaze is that it is saturated with sugar granules. So much so (150 grams), that you cannot dissolve all that granulated sugar in the little amount of liquid called for (4 tablespoons). You end up with a magical slurry of sugar crystals in rum. 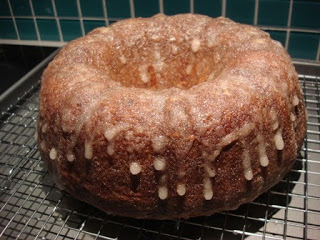 The mixture can be generously brushed onto the hot, freshly-baked bundt. You will want to use all of the glaze for this task. Trust me, you will thank me later. When the bundt has cooled, and the glaze has crystallized, you end up with a thick, sparkly layer of rum glaze, with random trickles that streaked down the sides of the bundt. Those trickles truly bring this bundt to the next level of rum-spiked “nogging” heaven. 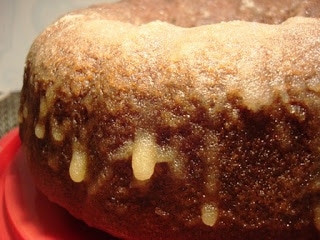 If you are looking to bake a bundt cake outside of the Christmas holiday season, be sure to try this cinnamon chocolate chip bundt cake made with sour cream. 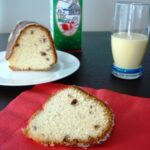 This eggnog bundt cake has eggnog baked into the cake and is topped with a rum glaze that crystallizes on the surface of the cake so that it sparkles!
Course Dessert
Cuisine American
Keyword eggnog bundt
Servings 16
Calories 373kcal
Author Janice 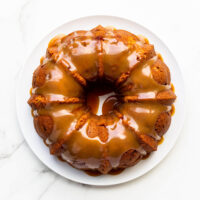 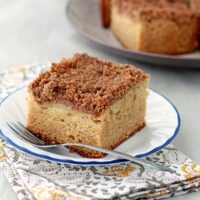 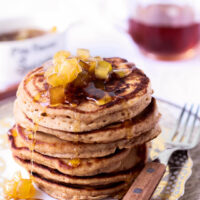