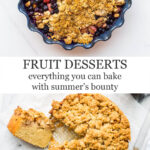 When it comes to baked fruit desserts, there are many variations and most seem to revolve around the same theme: a fruit layer baked with a dough on top and/or on bottom. The dough can be a pie dough, a yeasted dough, a biscuit dough, or even cake batter.

The naming varies by region or by family tradition, and can lead to some arguing within communities. Here's a list of fruit desserts that are common in North America to help mitigate some of the confusion. If you've ever wondered if you're baking a crisp or a crumble, a grunt or a slump, this list is for you! 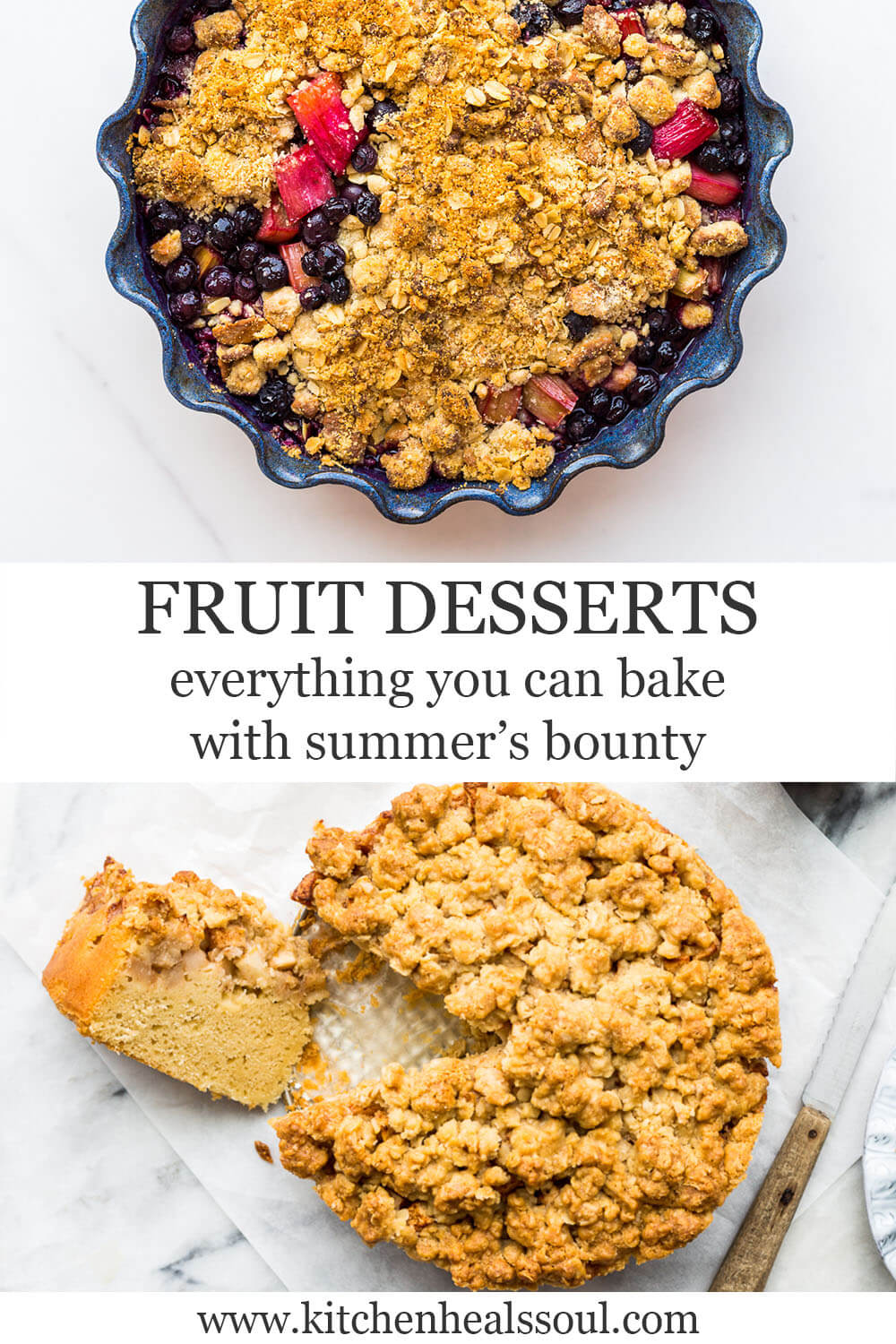 Fruit desserts with crust or cake on the bottom

Some fruit desserts are made with a fruit filling and a crust on the bottom, usually made from an all-butter pie dough. The fruit filling combines lots of fruit, sugar, and a thickener. The thickener helps to gel the fruit juices released with the dessert bakes so that the dessert isn't soupy.

Pies are made from a fruit filling surrounded by crust, usually on top and on bottom, though you can have single crust pies with a crust only on the bottom of the pie and topped with a crumble or crisp topping. You can find many examples of fruit pies on this site, especially sweet pies like this rhubarb lattice pie and this maple apple pie, both of which are double crust fruit pies. On the other hand, this whiskey peach pie is a single crust pie and topped with a crumble topping.

Fruit galettes are usually free-form pies that can be baked on a sheet pan, without a pie plate or tart pan. Galettes tend to be open-faced: a thick layer of fruits are piled on top of a sheet of pie dough, which is folded over the edges before baking to seal in the fruit juices. It's the easiest pie you can make. Here's an apple galette and a recipe for raspberry galettes to illustrate how easy they are to make! 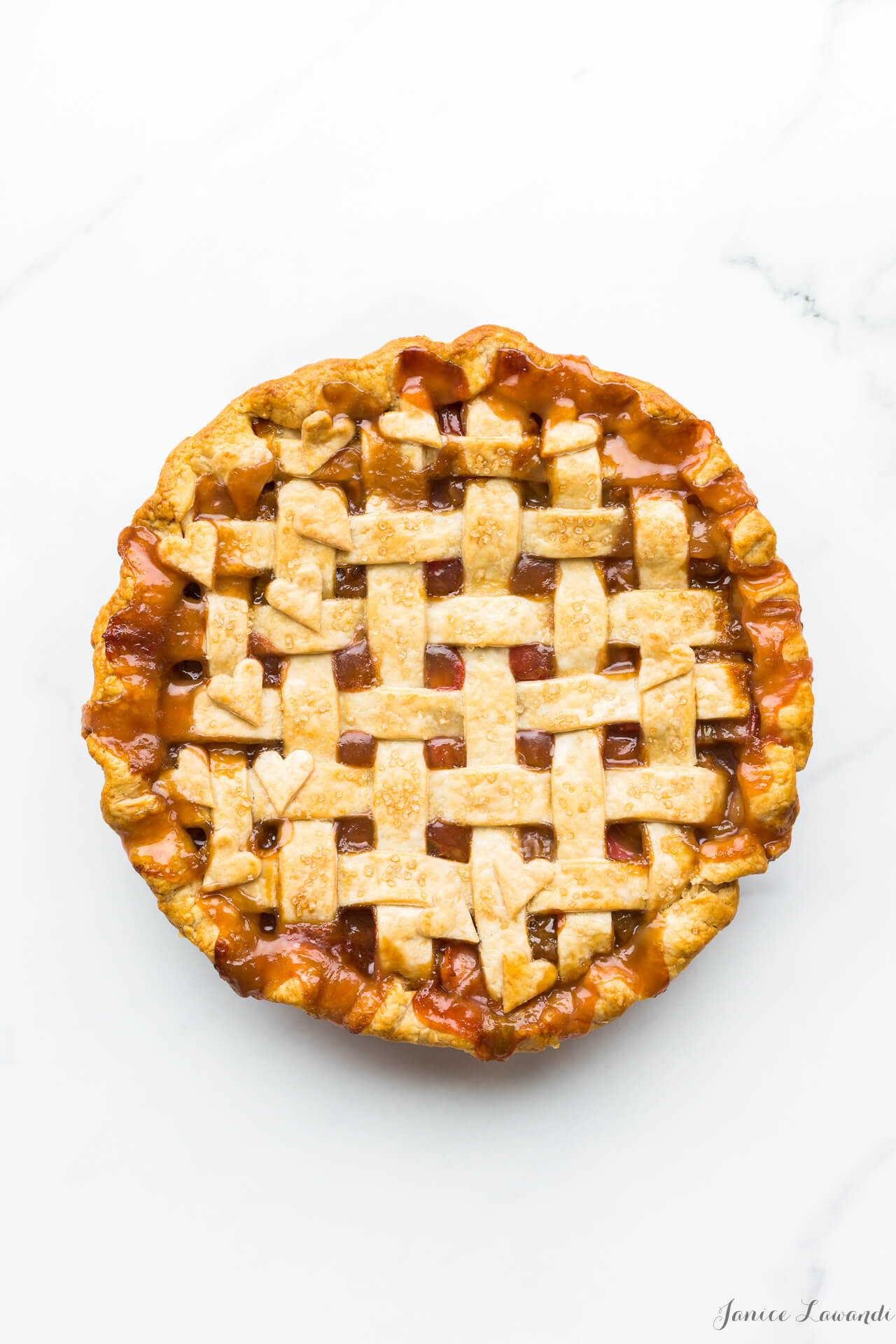 Fruit tarts are made with a sweet crust, like pâte sucrée that is blind baked in a ring mould or tart pan with removable bottom. Once baked, the tart is filled with custard, curd, ganache, or other fillings, and then topped with fresh berries. Examples of this type of fruit dessert include this raspberry chocolate tart, this strawberries and cream tart, or these cute mini matcha tarts with passion fruit curd.

Though the fruit is baked on the bottom of this retro dessert, upside-down cakes are flipped after baking so that the fruit is on the top in the end. The classic upside-down cake is made with rings of canned pineapple and bright red maraschino cherries, arranged in a decorative pattern. Today, bakers make this dessert with all kinds of summer fruit and even fall/winter fruit. This rhubarb raspberry upside-down cake is a beautiful example of a twist on the retro recipe. 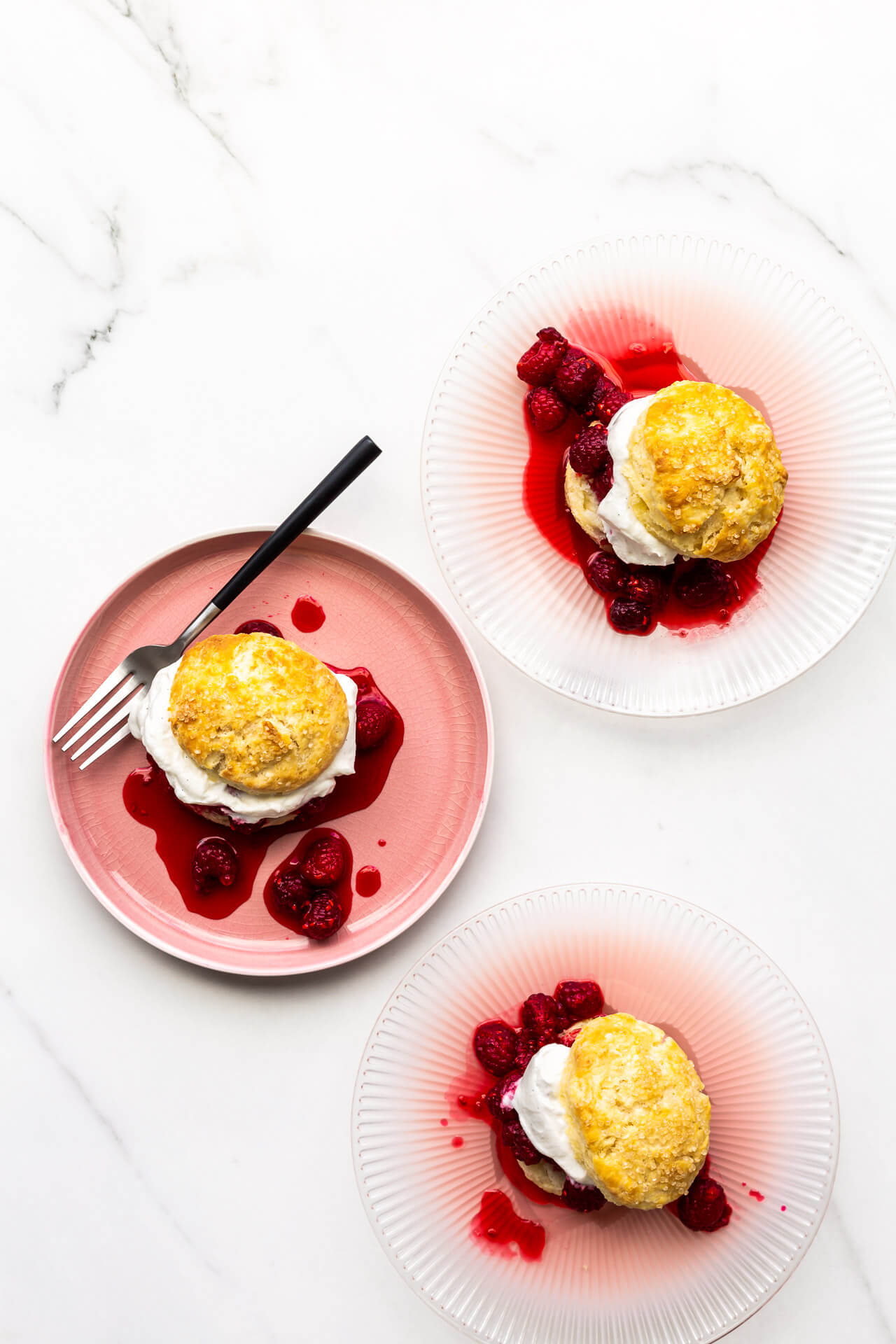 Fruit desserts with a crust on the top only

When fruit desserts only have a crust on top, the fruit filling also has to be thickened to make the fruit on the bottom less soupy. The dough on top can be a streusel of sorts, a crumble topping made with oats, dollops of buttery biscuit dough, or even an all-butter pie dough.

Crisps are made with fruit on the bottom and a buttery crisp topping of sugar, flour, nuts, oats, and butter. Crisp topping has oats. Some examples include these strawberry rhubarb crisps, sweetened with honey, this blueberry rhubarb crisp, and even this grape crisp with a peanut butter topping to show how creative you can get with the toppings.

Crumbles are like crisps but the crumble topping doesn't have oats, though it could still have nuts. The fruit is on the bottom in crumbles, as it is in crisps. This apple crumble doesn't have oats in the topping, so it's definitely a crumble. So is this cherry chocolate crumble. Again, you don't have to limit yourself to butter, sugar, and flour for the topping and you can come up with some fun variations! 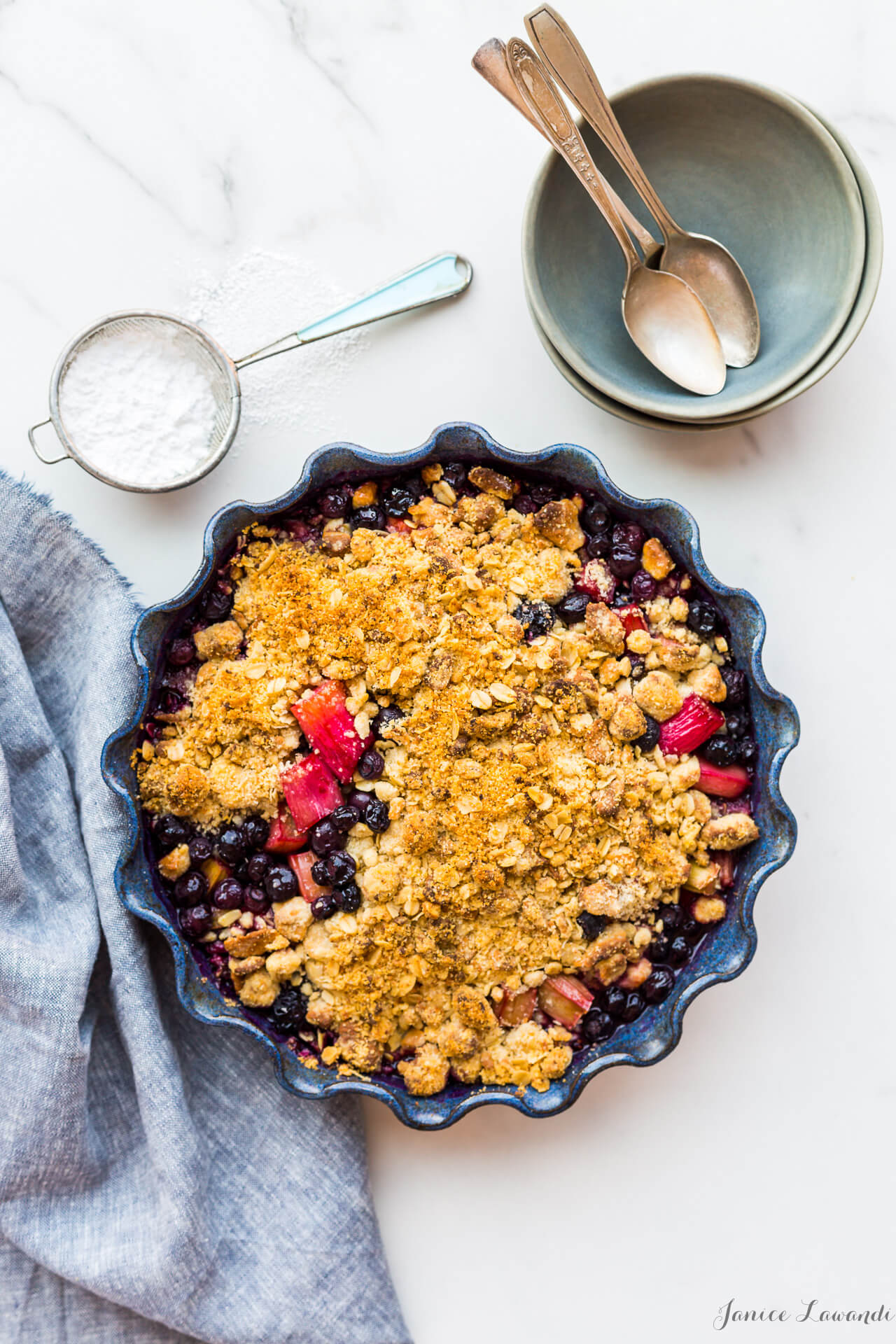 Cobblers have a biscuit top or a cake-like top with fruit on the bottom. Some may use bisquick mix to make the biscuit topping. This wild blueberry cobbler is a great example of a cobbler topped with cake layer. It seems whether the cobbler is topped with biscuits or cake is a regional distinction and can lead to some arguing.

Pandowdy got its name because it is made from fruit baked under pieces of dough in a pan. Apple pandowdy seems to be the most popular and most common, though one can imagine it with any fruit. Some use torn up store-bought puff pastry dough to make their pandowdy, though if you dare, you could use homemade puff pastry! 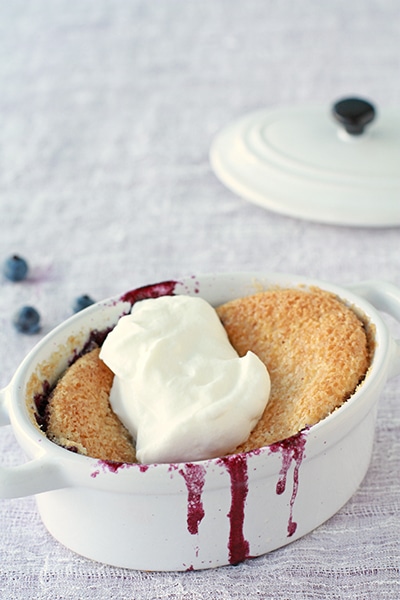 Grunts are cooked on the stove in a cast iron skillet, and they have a fruity bottom topped with dollops of biscuit or dumpling dough. The dish is steamed and gets its name from the sound it makes as it cooks, when the steam escapes, it may make a grunting sound. It's commonly cooked on the East Coast. To make a grunt, the fruit filling is cooked on the stove first until it's very hot and bubbly, then the dough is dolloped on top and the dish is covered to trap the steam. The dough is steamed to cook it.

Slump is named because the dessert slumps down as it cooks, and it's also cooked on the stove. The apple slump is mentioned in Little Women by Louisa May Alcott. The slump is sometimes topped with a yeasted dough, though others may top with a baking powder biscuit dough of sorts. To make a slump, like for grunts, the fruit filling is cooked on the stove first until it's very hot and bubbly, then the dough is dolloped on top and the dish is covered. The dough is steamed to cook it.

Sonker is only made in North Carolina in Surry County specifically and they even have a festival dedicated to this fruit dessert. The sonker is a deep-dish fruit dessert that has crust only on the top. It is not a cobbler. And it's not a pie as it doesn't have a crust on the bottom. The fruit layer is usually quite juicy. 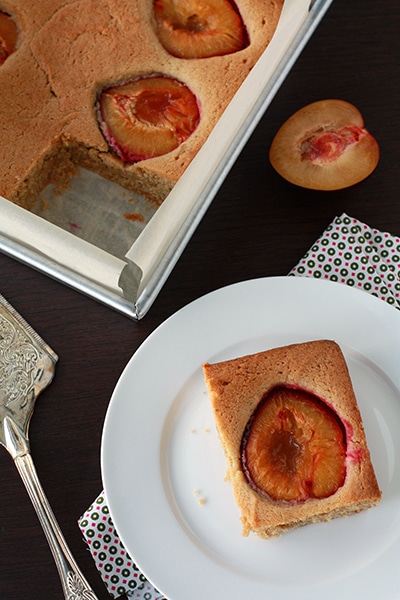 Desserts where the fruit is mixed into a batter

If you want to make a fruit dessert where the fruit is folded into a batter, it's important to either leave the fruit whole or to limit the amount of fruit used. Otherwise, the fruit may release too much water into the batter, which will make for a gooey or even gummy dessert.

Betty (also called brown betty) is a simple fruit dessert where the streusel is layered with the fruit in the baking dish, so the streusel adds sweetness but also thickens the fruit layer because the streusel is made with flour. Some will make the streusel with cinnamon sugar and ground or torn bread (instead of flour). This was a dessert that helped stretch the life of bread and so could be made with old bread so none goes to waste.

Buckle is like coffee cake but with fruit, as is the "boy bait" cake, which originates from the Pilsburry baking competition: a 15 year old entered this cake into the competition and won. The cake has fruit and is topped with a crumble or streusel topping. The most common fruit for this dessert is blueberry. In retrospect, I should rename this apple crumble cake recipe as an apple buckle because it's basically what it is: coffee cake + fruit.

The French pie cake is a cake where fruit is baked in the cake batter. I suppose these black currant cakes and this plum spice cake could fall into this fruit dessert category because they are both made from fruit baked in a cake batter. 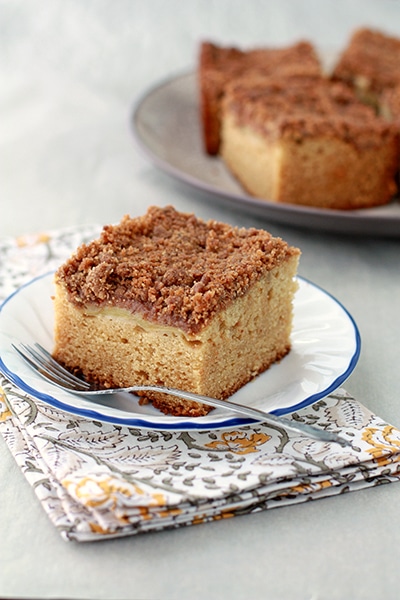 I've made apple clafoutis with chunks of apple, but technically a clafoutis made with fruits other than cherries is actually called a flaugnarde in French.

Of course, we can't forget fruit muffins, which are a very popular snack in the summertime when summer fruit is folded into muffin batter before scooping and baking. Yes, they are considered more snacks than fruit desserts, but we can't forget about them on this list. You can make red currant muffins, honey blueberry muffins, rhubarb muffins with sour cream, strawberry rhubarb streusel muffins, and even plum coffee cake muffins with cardamom. So many variations are possible and so easy to make!

During the off season, you may want to bake some of these desserts with frozen fruit and you can:

I store fruit desserts tightly wrapped with foil in a cool place, but not the fridge. This way, they can easily last 4 days without any problems. If your kitchen runs hot, you may have to refrigerate the dessert to preserve it longer. Muffins and cakes can be frozen and quickly defrosted, especially if they are portioned out.