By Janice on January 14, 2020 in Baking ingredients, Baking school 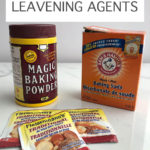 Are your baked goods too dense or fall short? There are ingredients that make your cakes rise, but also special techniques. If you’ve ever wondered what makes a cake rise, here’s a detailed list of all the leavening agents and techniques that you can use to make desserts lighter, cakes fluffier, and give breads a better texture, from chemical leaveners like baking soda and baking powder, yeast, eggs, cream, butter, and even steam!

What is a leavening agent?

The easiest way to add volume to your baked goods (to make them fluffier, less dense, to improve the texture and mouthfeel, etc) is with a chemical leavener because they require little work from you.

In baking, you might notice most cake and cookie recipes call for either baking powder, baking soda, or a combination of the two. These are chemical leaveners, meaning that when you add them to your cake batters and cookie doughs, a reaction will happen to produce a gas, usually carbon dioxide (CO2). The chemical leavener does the work for you.

Very small quantities of a chemical leavener can have a big impact on your baked goods, so make sure to be very careful when measuring ingredients like baking powder and baking soda.

Baking soda, a.k.a sodium bicarbonate or bicarbonate of soda, has the chemical formula NaHCO3 and is a dry powder that requires an acid to react and form the gas carbon dioxide. Recipes that are made with baking soda also have an acid on the ingredient list (vinegar, lemon juice, buttermilk, yogurt, sour cream, etc.). As the carbon dioxide forms, it produces bubbles in your baked goods (or unbaked goods), which rise. It’s important to find the right balance of how much baking soda (and acid) to add to a recipe because too much baking soda in baking isn’t necessarily a good thing! Baking soda is what gives Boston brown bread its signature colour and flavour, and baking soda aerates a rustic quick bread making it less dense, like in this Irish soda bread with raisins, a bread that uses baking soda instead of yeast.

Yeast is a living organism and it’s what you add to bread doughs to make them rise. Just like baking powder and baking soda will react to produce CO2, yeast will perform chemical reactions, known as fermentation, to produce a liquid that eventually releases carbon dioxide gas and flavour compounds. Yeast will literally eat the sugar in your bread recipe, digest it, and “exhale” CO2 gas. The yeast organisms are actually producing the same result as chemical leaveners in that the gas they produce helps baked goods rise, but along with that CO2, yeast are also producing flavour compounds (alcohols) as they break down the sugars in your bread dough. So yeast will not only provide gas to lift up your baked goods so they rise, acting as a biological leavener, yeast also provides flavour in even the simplest of bread recipes, like easy brioche recipe kneaded with a mixer or no-knead cinnamon raisin bread. If your bread dough doesn’t rise even though you’ve added plenty of yeast, you might need to check if your yeast is still good.

Yeast is a fungus sold dehydrated as active yeast or instant yeast, and it’s also available in some stores as fresh yeast.

Yeast is commonly sold dehydrated in packets or in jars at the grocery store. Dehydrated yeast may be “active dry yeast” or “instant dry yeast”.

If you are working with active dry yeast, you will have to stir it into warm water (usually around 110 ºF or 43 ºC) before mixing it with the other ingredients. This is to hydrate the yeast and activate the cells. It takes about 10 minutes to properly hydrate the yeast and you have to take the time at this step before incorporating yeast with your other ingredients. When making bread, your recipe might suggest to let the active dry yeast soak in warm water with a pinch of sugar. The sugar is to feed the yeast and get it going. You’ll notice the mixture become foamy as the yeast eat the sugar and exhale carbon dioxide gas. The yeast are also going to start multiplying at this stage. This step is referred to as “proofing the yeast” where you make sure the yeast is still alive and you start to encourage the yeast to grow.

The beauty of instant dry yeast is that the dry yeast can be mixed in with the dry ingredients at the very beginning, without having to dissolve or feed the yeast. Instant dry yeast is more porous, allowing it to easily soak up moisture to become active as soon as it comes into contact with moisture. This allows you to skip the proofing step to incorporate it into recipes right away. Depending on the brand, instant dry yeast may be called RapidRise or Quick-Rise yeast.

Fresh yeast is usually vacuum-packed in blocks referred to as “cake yeast”. Today, in some cities, it can be more difficult to find fresh yeast because it’s less stable. Fresh yeast has to be refrigerated and even then, has a limited shelf life, especially compared to dehydrated yeast which can be stored for years under proper conditions. If you want to bake with fresh yeast, but you can’t find it at the grocery store, ask at your local bakery because bakeries tend to favour fresh yeast.

Sourdough starter is another way to introduce living organisms, specifically wild yeast, into your bread dough and therefore carbon dioxide to help your breads rise. You can also add sourdough starter to cakes, muffins, and quick breads to make them rise too. 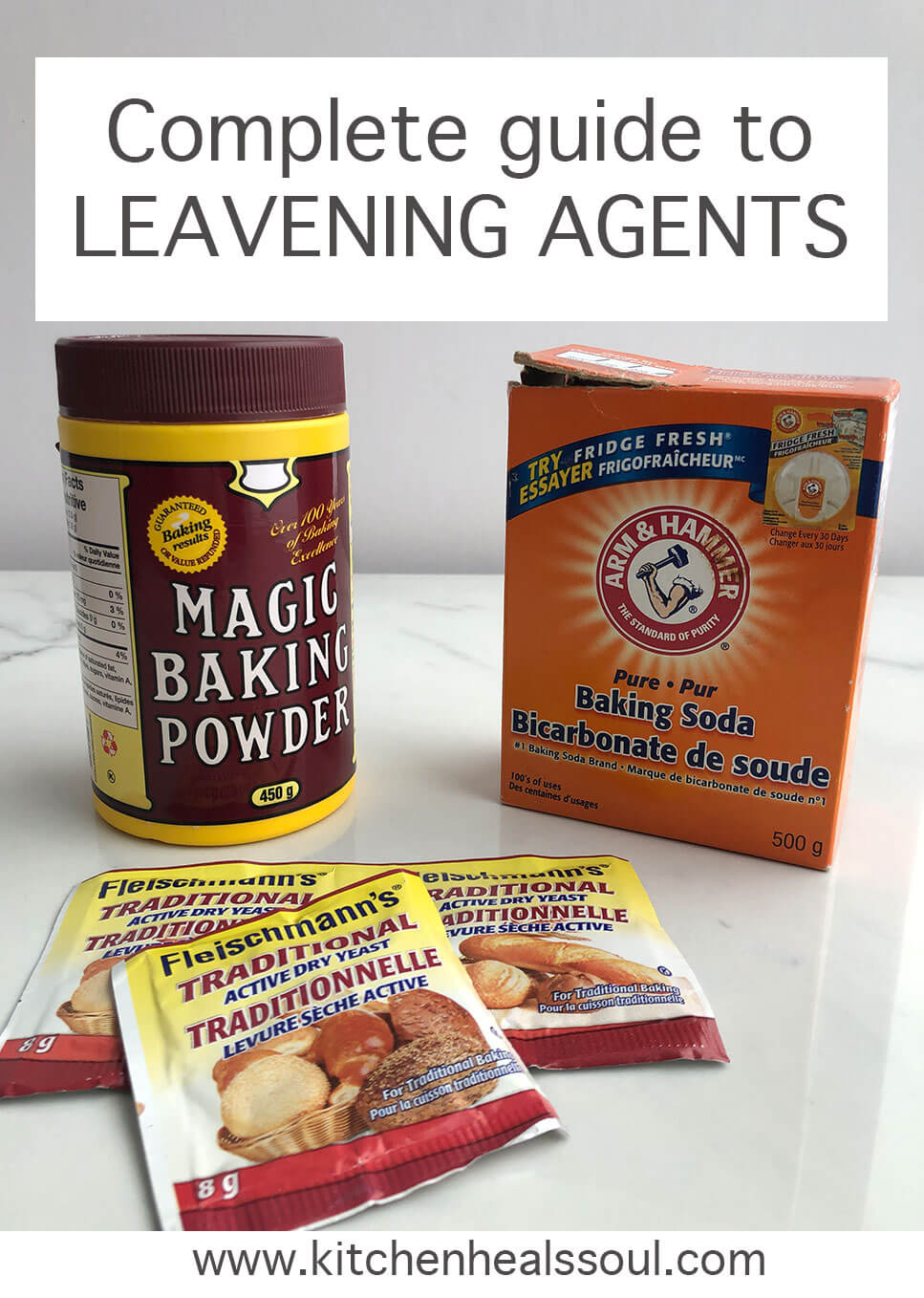 There are mechanical, or manual, ways of incorporating air into baked goods and recipes, but this means you will have to do more work because you physically (or mechanically) have to beat air into the mixture to increase the volume, forming stable bubbles of air. For this job, bakers use whisks, hand mixers, stand mixers to incorporate air into a mixture. But in order to form a stable foam and mechanically incorporate air in your recipes, you need to use specific ingredients and techniques:

The most commonly known way to add air into a recipe is by whipping egg whites. The whipped egg whites grow in volume as air is trapped in tiny bubbles. For example, chocolate pavlovas and angel food cakes start with whipping egg whites and sugar until they’ve tripled in volume, which can take 10 to 15 minutes of whipping. This step incorporates a ton of air into the egg whites, ensuring a light, aerated texture in your baked goods, before they even hit the oven. Italian meringue buttercream relies on Italian meringue (egg whites beaten with a sugar syrup) to produce a light, fluffy texture in this frosting recipe.

Your favourite sponge cake recipe may depend on whipped egg whites, but many sponge cake recipes start with whole eggs and sugar, to add air into your cakes before they are baked (whereas chemical leaveners may only react in the oven in some cases). Genoise cakes, like the chocolate genoise in this black forest cake, rely on whipping whole eggs with sugar to the ribbon stage, incorporating a ton of air from the very beginning of the recipe

Instead of relying on egg whites to trap air and make meringues, you can also use aquafaba (the soaking liquid from a can of legumes).

I think steam might be the least obvious leavening agent on the list, but actually, as your recipes bake in the oven, water will evaporate and go from liquid to gas, rising up and lifting your baked goods as the texture firms up, giving them volume and a lighter texture. Yorkshire puddings and popovers are a prime example of a baked good that rises as water evaporates. These recipes are baked at a higher temperature (400 ºF or more) so that water evaporates very quickly before too much of a crust forms on the surface. The popovers and Yorkshire puddings puff rapidly as a result. Steam from layers of butter is what helps puff and separate flaky layers of laminated doughs, like when you bake a batch of homemade croissants, homemade puff pastry, and even cream puffs.

If you baked a cake recipe, but notice your cakes aren’t rising to their full potential, try to analyze the ingredient list and the techniques involved. If it’s a sponge cake, are you whipping the eggs enough? Or perhaps should you consider separating the egg whites from the yolks to build up more volume with the whites? Are you positive that you baked your cake long enough? If you are asking yourself why did my cake sink, the answer might be that it’s underbaked… Did you add too much baking soda? Or too much baking powder? Or maybe you don’t have enough baking powder in your recipe given the quantity of dry ingredients in the recipe? 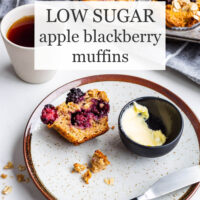 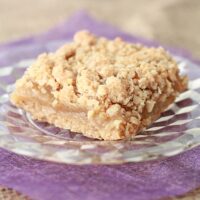 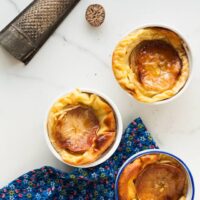