This rhubarb bostock recipe is a fun brunch recipe that is sure to wow your brunch guests, made with brioche, homemade frangipane, and rhubarb jam. If you don't know what it is, keep reading! 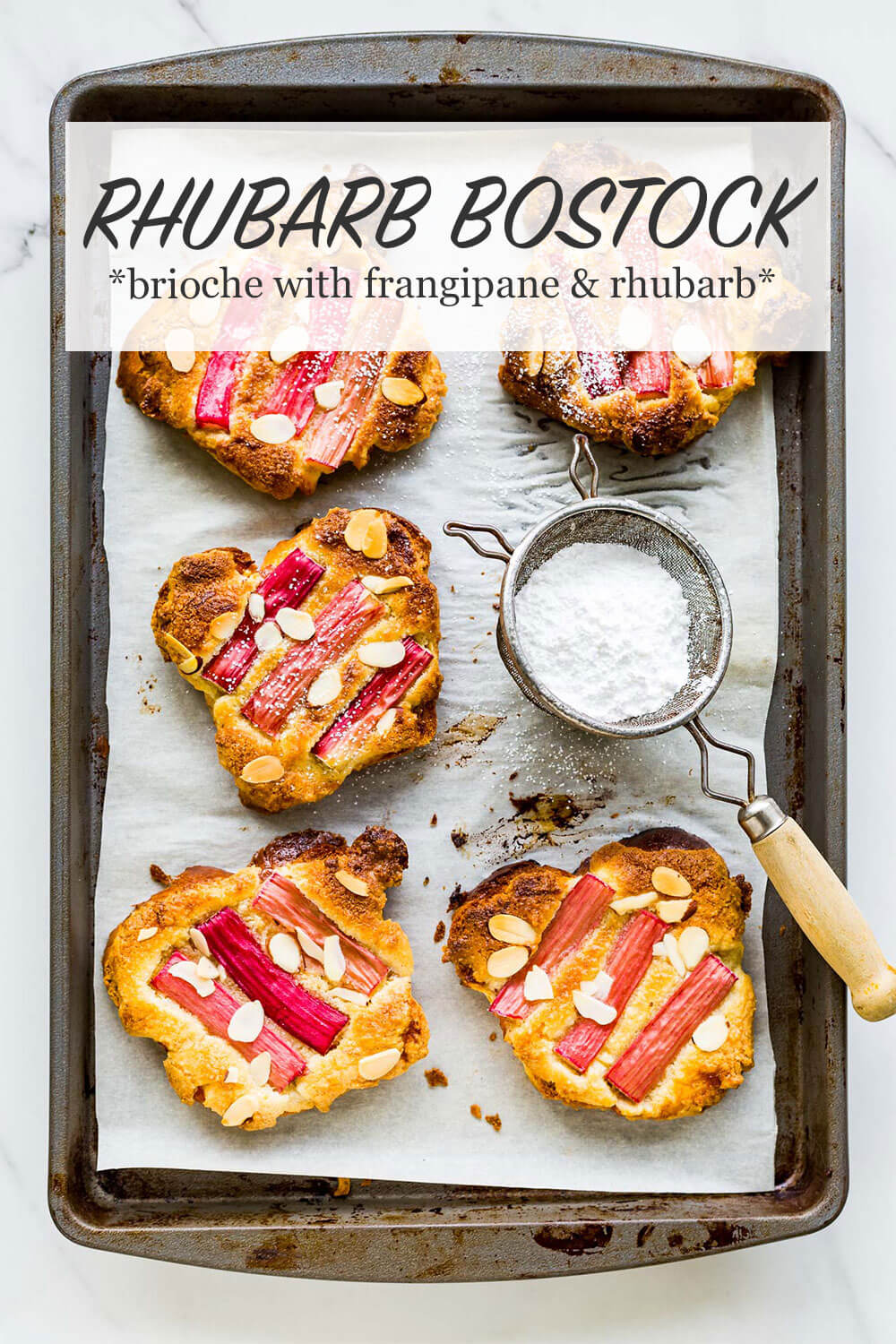 I know that is the question you are asking because my mom asked me that very thing while I was putting these together. Bostock is a sweet tartine of sorts:

Think of it like a "croissant aux amandes" (almond croissant,) but it's much easier to make than homemade croissants! It combines all my favourite food groups: butter, bread, jam, and frangipane. You can eat bostock for breakfast, but you can also eat bostock as a sweet snack! 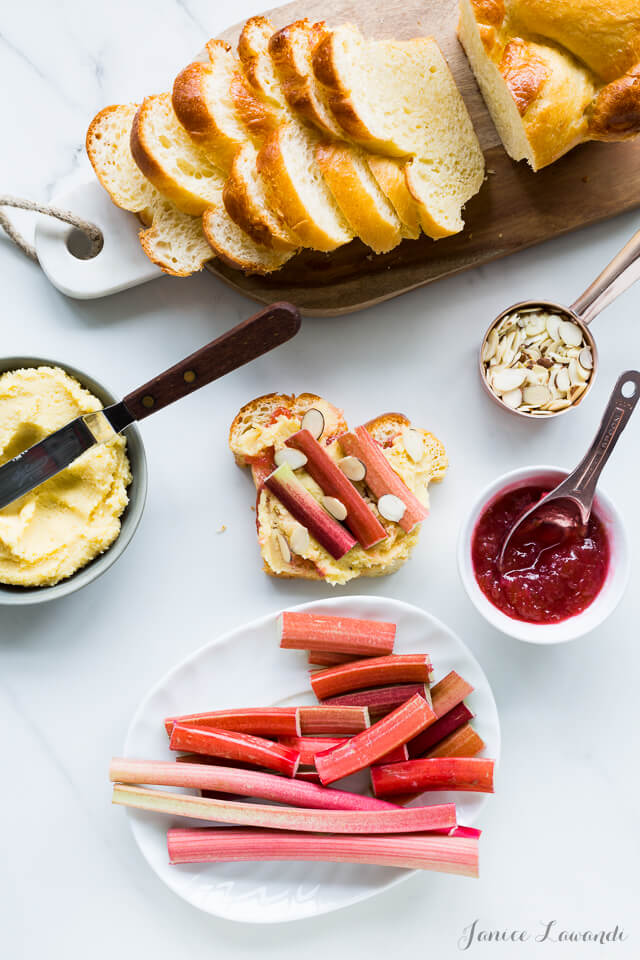 Frangipane is one of my favourite fillings. I've used it in these blueberry almond mini pies and this pluot pistachio tart (well, that last one is frangipane made with pistachios instead of almonds).

Frangipane is so versatile and it really is quite easy because the base recipe for it contains equal parts of butter, icing sugar, and ground almonds (the French recipe term for equal parts is tant-pour-tant, abbreviated tpt). An egg, vanilla, and almond extract is added to bring it all together into a flavourful filling for so many classic desserts and treats. You can add a little rum to frangipane for flavour too.

For this recipe, I used orange blossom water, which is such an awesome match with rhubarb. I've paired rose water with rhubarb in a rhubarb chocolate tart, and so this was a variation on that theme. The bostock are baked in the oven for about 25 minutes or so, on the middle rack of a 350ºF oven, then I move the baking sheet up to the top rack, and turn the broiler on to 450ºF, which helps brown the top nicely (watch it so that it doesn't burn in the oven!).

I also made a quick small batch of rhubarb jam to slather between the frangipane and the brioche. It's rhubarb season, so rhubarb is what I am craving, but you can use your fave homemade rhubarb jam without pectin. Some people actually dip the stale bread in a flavoured syrup instead. I prefer the jam route, personally. 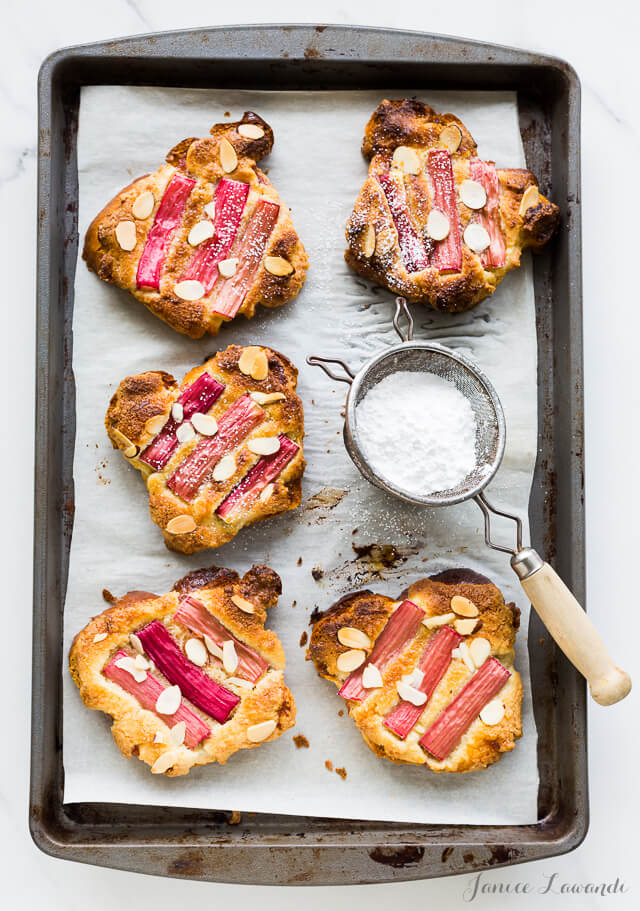 This rhubarb bostock is an easy brunch recipe made with thick slices of brioche bread topped with rhubarb jam, frangipane, pieces of rhubarb, and sliced almonds, baked golden brown. It's definitely one of the best rhubarb recipes I've made so far! 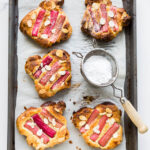 For the rhubarb jam

To make the rhubarb jam

To make the frangipane

To assemble the bostock 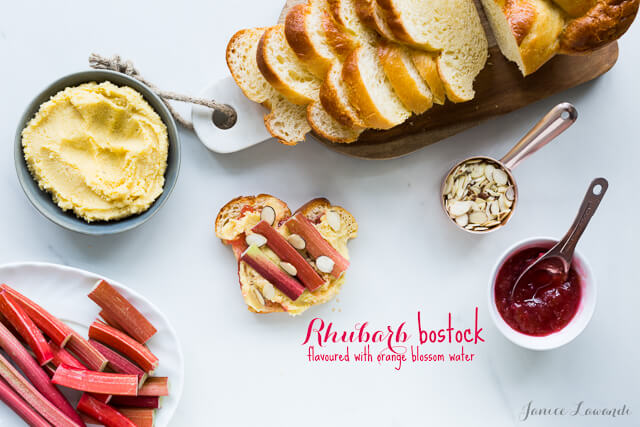