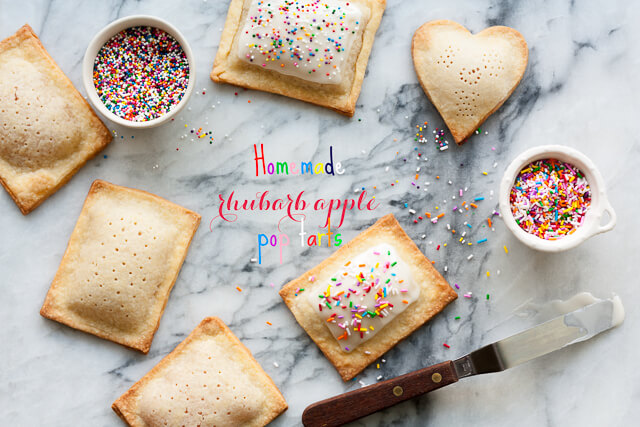 I don't know why, but I thought this recipe for homemade pop tarts would be easy to develop. Hah! I'm funny that way. Of course, I was absolutely wrong!

We finally have rhubarb in Montreal, so I made a rhubarb apple compote (with a few raspberries thrown in to help the compote achieve a pretty pink hue) to fill the pop tarts with, and then I let it cool (step 1). Chilled, the rhubarb apple compote seemed a little loose, so I mixed it with cornstarch and heated it up to get that cornstarch to thicken it (step 2). I thought it was fine. So I carried on and made a lightly sweetened pastry. Then it was a matter of rolling and assembling. Everything was going well. I even went to the extra effort of glazing them. They looked so cute! I photographed my efforts. I thought I was done (steps 3, 4, 5, 6). 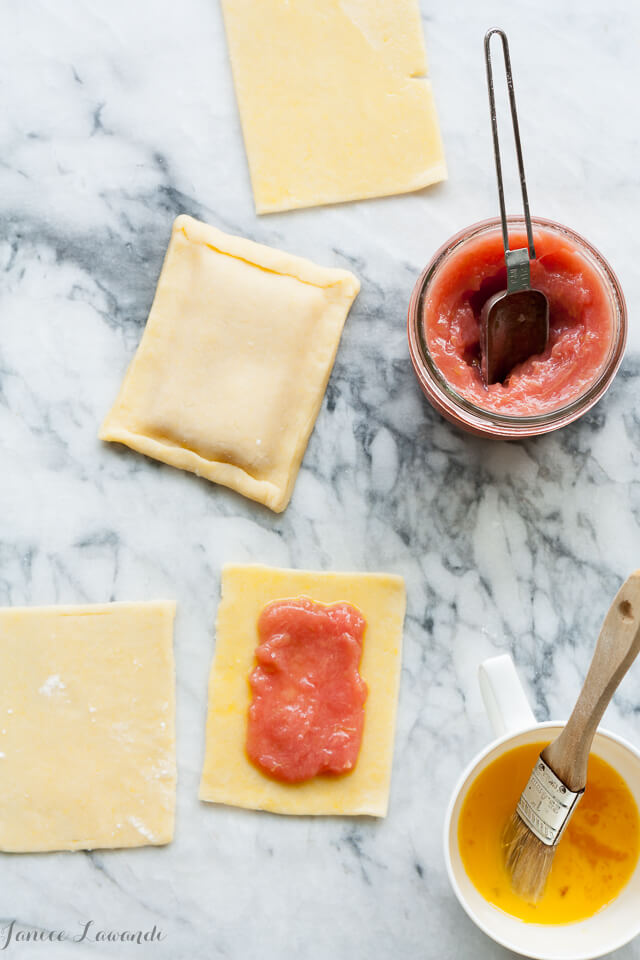 Done, except the pop tart I bit into was hollow.

So then, I bit into another. And another. They were all pretty hollow, which led to much sighing and also regret because I basically ate all the hollow pop tarts. I have this thing about eating the evidence. I knew I shouldn't but I plopped my bum on the floor, pondering the recipe and munching on the pop tarts, as though every bite of pop tart would lead me to the solution to the problem. I thought a lot, so I ate a lot of pop tarts, roughly 11 of them (step 7). 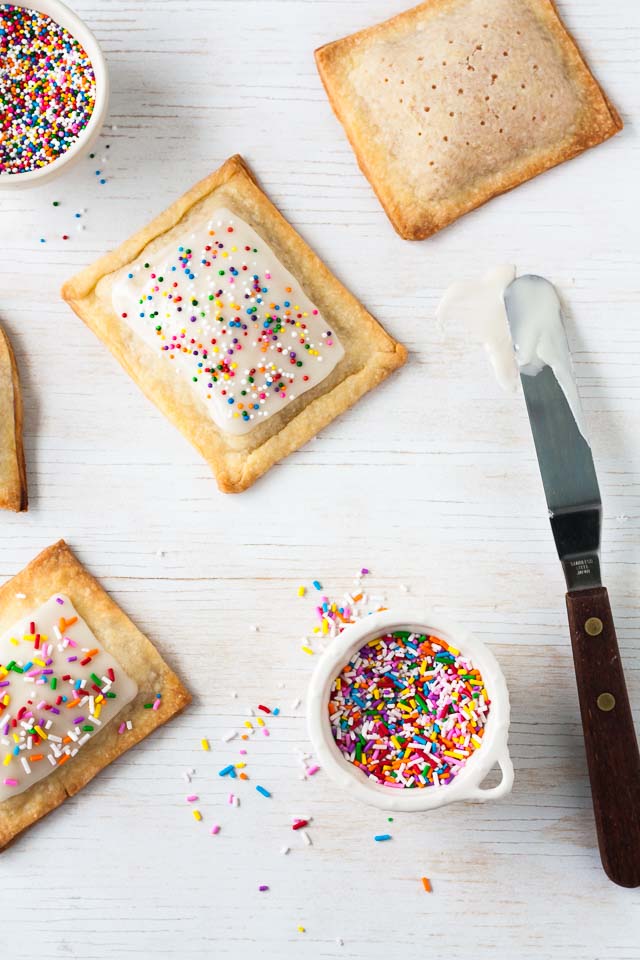 Cornstarch didn't work, or rather it did its job, thickening the compote, but it didn't prevent the compote from disappearing in the oven. I thought about how the pop tarts puffed in the oven as they baked.... After much munching and thinking, I decided the quick fix at the beginning shouldn't have been cornstarch, but rather I should have cooked down the compote to a butter of sorts, boiling it down to remove as much water as possible until it was super thick, almost like a fruit paste just on the verge of caramelizing. I hoped this would reduce the puffing in the oven and also prevent the filling from further reducing and/or disappearing as the pop tarts baked. Made sense to me! Hindsight is 20/20, right? 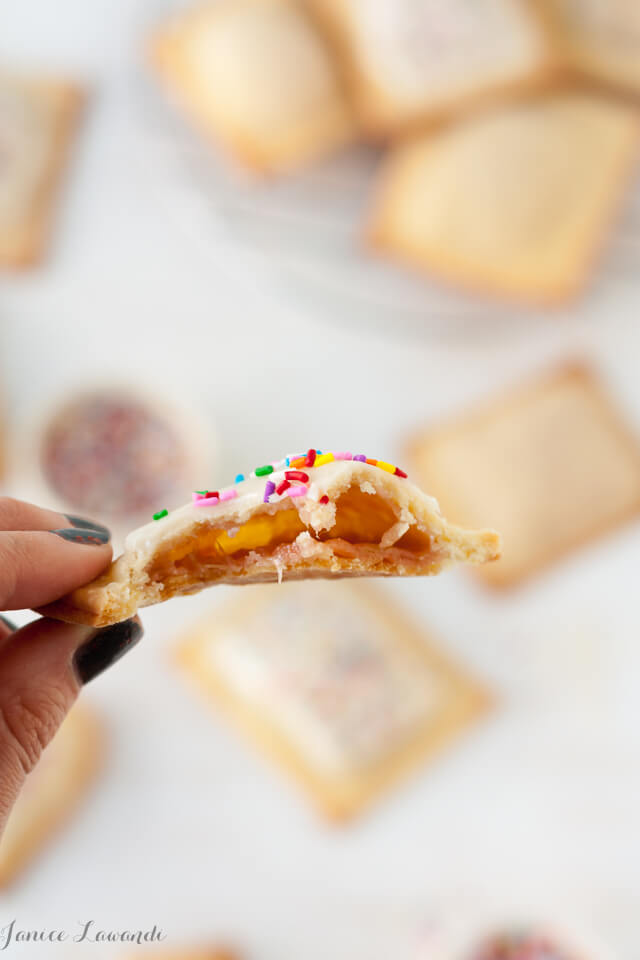 So I made another batch of rhubarb apple compote, but this time I kept cooking the compote until it was extremely thick and pasty (step 8). I went from 8 cups of chopped fruit all the way down to 2 cups of fruity butter. I was proud, and after chilling overnight, I made more pop tarts with that rhubarb apple butter. The pop tarts still puffed, but the filling stayed put. I ate these pop tarts to confirm this (probably about 6 of them) The puffing led me to believe that maybe I also should bake from frozen so as to minimize the ability of the pastry to lift upwards before setting. So I tried that (step 9) but I still wasn't satisfied and I didn't like how the top pastry appeared slightly under-baked . I ate these pop tarts as well, to confirm my findings (there were 6 of them) (step 10). I also tried baking at a higher temperature, and baking at a lower temperature. At higher temperature, the pop tarts burned too fast. At low temperature, the pop tarts just looked funny (steps 11 and 12). 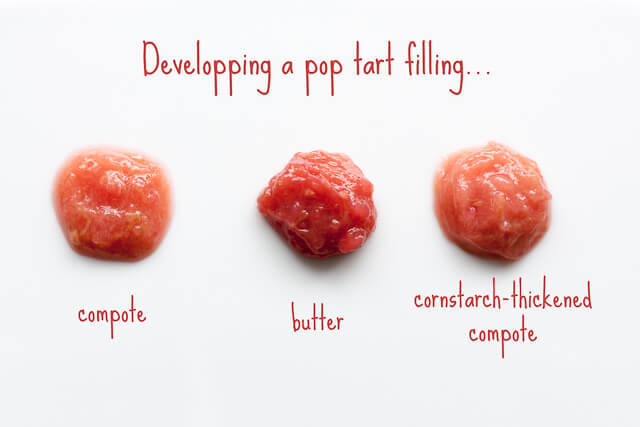 Then I started to tweak the pastry dough recipe because I noticed it was a bit sticky as I rolled it, so I made two half-batches of dough, one using the sanding method and the other using the creaming method, and both with less milk added at the end (steps 13 and 14). Of course, I had to make more pop tarts to see how my two doughs would fare in the oven (steps 15 and 16). Things were getting confusing at this point because I was baking pop tarts with two different doughs in the same oven, trying to maximize my time efficiency while also struggling to keep track of them because both doughs looked identical. Both versions of the crust seemed pretty similar to me once baked. Perhaps the dough made by the "sanding" method might have been ever so slightly sandier (duh!). I ate about 8 more pop tarts to be sure (step 17). I also tried docking the top pastry layer extra before baking with the hope of venting them better. That might have worked, but it also resulted in a more broken top pastry layer. 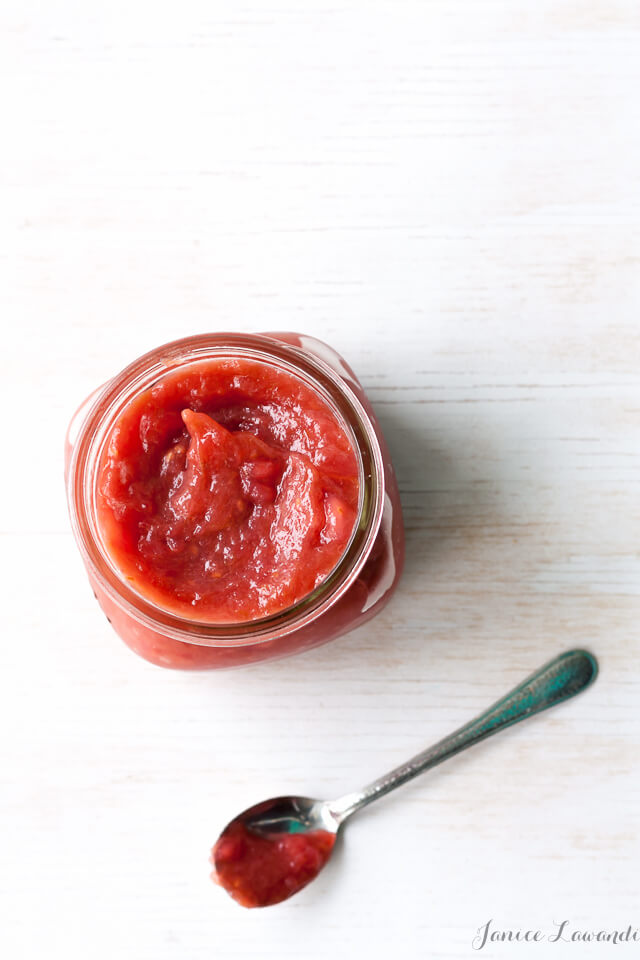 If you eat 32 pop tarts in the span of a few days, you do not magically transform into a pop tart. I can say that much for sure. Thirty two pop tarts later, I can say that cooking down the compote into a rhubarb apple butter was brilliant. The filling tastes a lot like tart rhubarb but mellowed by the apple, and it is absolutely dreamy when sandwiched between two pieces of sweet pie crust. I can say that with less milk added to the crust recipe, there was less puffing in the oven, or rather there was puffing and cracking, which helped let steam escape. I suppose with more milk, the hydrated starches glue the dough better, leading to puffing of the dough that doesn't crack or break as easily. I noticed this while rolling as well: the dough with less milk was a touch more fragile. I guess it's a little "shorter" in texture. This is all hypothesis at this point and fuelled by delicious homemade rhubarb apple pop tarts. 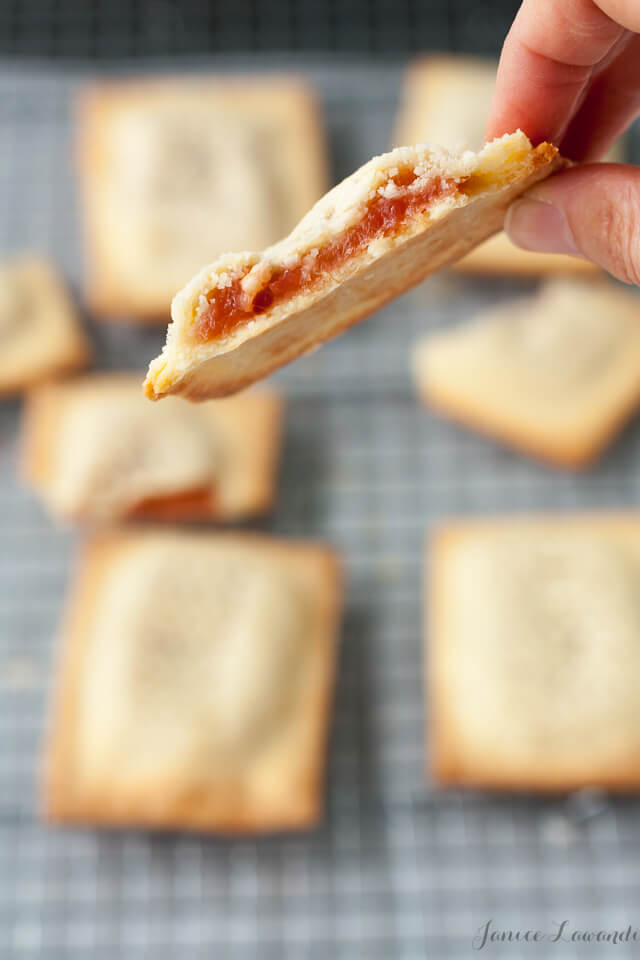 If you try this recipe, please let me know how it goes. I did my best to get it right, but after awhile, I also hit a point where I was saturated and couldn't see straight. Or if you have suggestions on ways of improving this, I'm all ears! And if this story sounds familiar, that's because I also toiled over other hand pie recipes, like these blueberry almond mini pies and these blueberry hand pies. Don't worry, if you don't have the patience for pop tarts and hand pies, there are also lots of full sized pie recipes to explore! 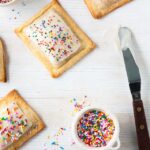 For the pop tarts

For the glaze (optional)

To make the dough

To assemble and bake the pop tarts

To decorate the pop tarts