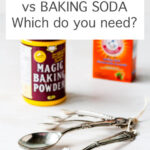 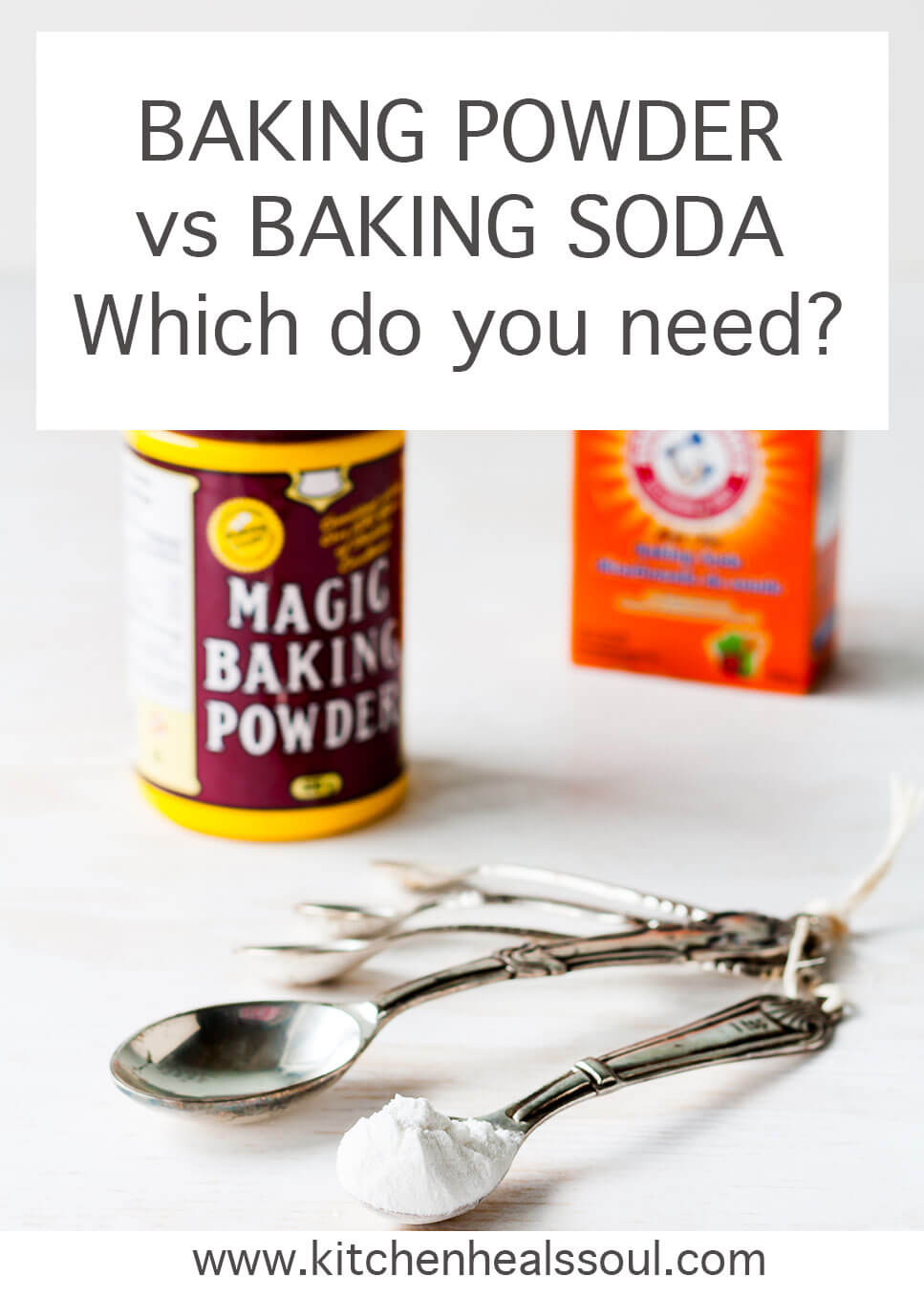 A box of baking soda is 100 % sodium bicarbonate and contains no other ingredients but this alkaline powder. Baking soda is shelf stable, meaning that you can store it for quite a long time without it breaking down or reacting. Baking soda, when hydrated and mixed with an acid (like buttermilk or sour cream in a recipe), will  break down to form the gas carbon dioxide, which helps your cakes rise.

On the other hand, baking powder is a powder mix of multiple ingredients: baking powder combines baking soda, an acid (or two), and cornstarch (to absorb any moisture and keep the powder dry). So while baking soda has to be combined with an acid to make your cakes rise, baking powder has everything needed in the one powder to help cakes rise.

When does a recipe need baking powder?

Use baking powder in "pH-neutral" recipes

In simple recipes, like in this vanilla cake or this Earl Grey cake, you'll notice that the list of ingredients includes: butter, sugar, vanilla, eggs, flour, salt, milk. This cake recipe doesn't include any acidic ingredients. If you made this recipe without any chemical leavener, you would end up with a dense cake with a tighter crumb, like a pound cake.

Any lightness or airiness in a cake, in the absence of chemical leaveners, would have to be worked in by hand, by properly creaming the butter and the sugar at the first step to incorporate enough air to lighten the cake. With this recipe, if you want to add extra fluffiness and open up the crumb of the cake, baking soda wouldn't work in this case because there isn't an acid in the ingredient list. Remember baking soda reacts with an acid to produce carbon dioxide to help your cakes rise. Without an acid in the ingredient list, the baking soda wouldn't react much, if at all. Your final cake will have unreacted baking soda in it, which might contribute off-flavours to your cake and cause it to brown excessively in the oven (just like when you add too much baking soda), the texture will be just as dense and tight as the recipe without baking soda.

The fact is that in a simple cake recipe that is butter, sugar, vanilla, eggs, flour, salt, and milk, baking soda is not the right chemical leavener for the job. You need to add baking powder, which is what I did when I developed the above-mentioned cake recipes.

When does a recipe need baking soda?

You add baking powder to recipes that don't have any ingredients that can contribute some acidity. When do you need baking soda and not baking powder? In a recipe like this Irish soda bread with raisins, you'll notice the bread is made with 2 cups of buttermilk. Buttermilk is acidic and so, in order to provide a lift to this bread dough, to open up the crumb and create a nice bread with a good texture, you have to add baking soda to react with the buttermilk to help the bread rise. The baking soda will react with the acids in the buttermilk to form carbon dioxide, which will help your soda bread rise.

So when a recipe has a lot of acid, you need to add baking soda to help your baked goods rise (whether a cake or a bread).

In some recipes, you might add a little extra baking soda so that your baked goods will brown more in the oven. Remember that Maillard browning is faster under alkaline conditions. So a little baking soda might increase the pH enough to help your baked goods brown. This is especially true with cookies, which bake for under 20 minutes (usually as little as 8 minutes). Many cookie recipes will include some baking soda to help them turn golden brown delicious in the brief time they spend in the oven.

When does a recipe need both baking soda and baking powder?

When I was researching baked donut recipes last month, I noticed that there were a lot of variations in the chemical leaveners used from one recipe to another: some called for baking soda, others baking powder, some called for a combination of both, and then there were the recipes that also included vinegar in the mix. So when I was working on these baked donuts with almond milk, I decided I might as well investigate and see if there was any benefit to using one or the other, or all of them.

In some recipes, the amount of baking soda added is enough to neutralize the acids in the recipe, but the amount of carbon dioxide that is formed might not be significant enough to contribute enough rising power for your baked goods. Your recipe might need an extra boost of rising power. That's when you'll see both baking powder and baking soda used together. The baking soda (coming from both the baking powder and the baking soda itself) will react quickly with the acidic ingredients (like buttermilk, sour cream, or yogurt), and then the leftover baking soda will react with the other acids coming from  baking powder which are slower to react and sometimes only react with the heat of the oven. This chocolate chip bundt cake made with sour cream is a perfect example of using both baking soda and baking powder in a cake recipe with an acidic ingredient.

Adding only baking powder to a recipe could mean that your cake batter or your cookie dough is pH neutral or even slightly acidic, depending on the ingredients. There's nothing wrong with that, except that we know that some of the essential browning reactions (Maillard browning) in baking only happens under alkaline (basic) conditions. These browning reactions are vital to producing the visually appealing golden brown delicious colour of baked goods and also for producing some important flavour compounds. There are recipes that are made with both baking powder (for leavening) and baking soda (to facilitate browning by increasing the pH making batters and dough a little more alkaline). 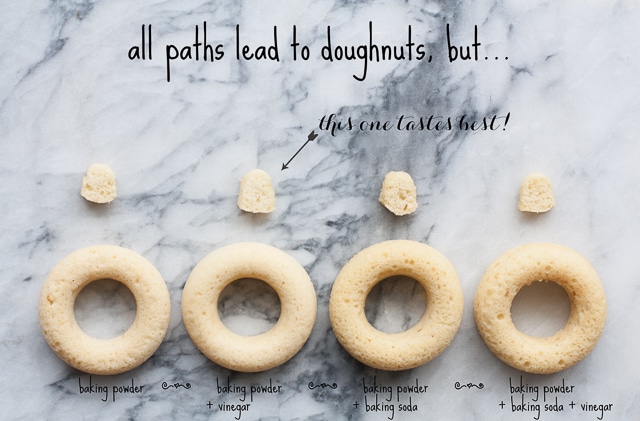 Coming back to my baked donuts with almond milk tests: all the recipes I tested out made perfectly good baked donuts, but I honestly felt that the flavour of the recipe containing baking powder and a touch of vinegar was the best—the almond flavour was the most pronounced. The other thing I noticed, not surprisingly, was that the recipes with a little extra baking soda browned better. That's the Maillard reaction, which is faster at higher pH, a.k.a. when your batter has a little more baking soda in it (but remember the right amount of baking soda is key and too much baking soda can lead to over-browning and a soapy flavour!). I figure that many baked donut recipes contain extra baking soda to speed up the browning process since baked donuts are only in the oven for a dozen or so minutes. Without the help of baking soda, your baked donuts have a very pale look to them. Personally, I think that if you are going to glaze the donut anyways, the extra baking soda isn't really all that necessary. Plus the difference in colour is so minimal.

Substituting one chemical leavener for another can be very tricky. Here are some guidelines to help you substitute baking soda for baking powder, and baking powder for baking soda. In all cases, you will inevitably have to do some testing and adjustments to get the recipe right if you are making substitutions like these.

If you want to replace baking powder with baking soda, add less baking soda and add an acid to the recipe

If you want to replace baking soda with baking powder, add more baking powder and reduce the acid in the recipe 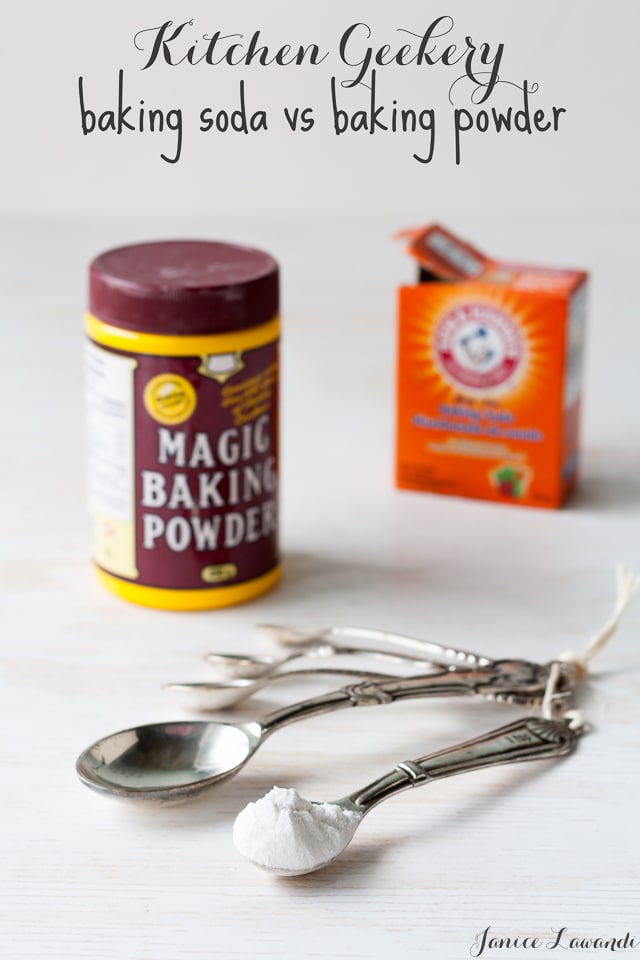